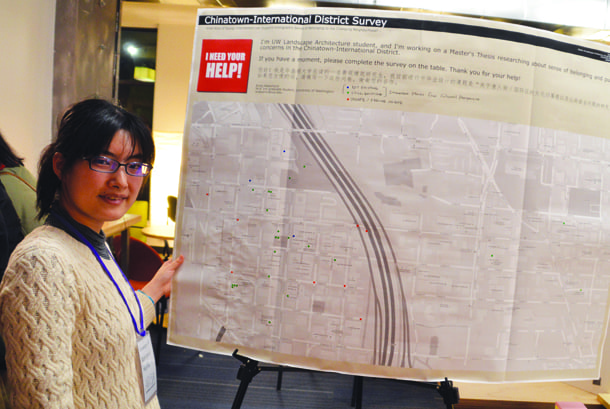 “We really wanted the opportunity to spread information about the neighborhood that people might not know about,” said Jamie Lee, SCIDpda’s IDEA Space program manager.

“When I thought about the projects we wanted to showcase here, those were the projects people ask us about the most, with the exception of maybe one, which is under I-5,” a- she added. The SCIDpda often receives questions about neighborhood projects such as the status of Hing Hay Park or ongoing construction in the neighborhood, Lee said, and the purpose of kicking off was for neighborhood residents to meet people behind these projects and to answer their questions.

Matt Auflick from the Office of Emergency Management has prepared a chart with information on two projects. One was the city’s new notification system, ALERT Seattle, which is set up to send emergency notifications directly to people’s phones. The other was unreinforced masonry buildings – brick buildings usually built before 1945.

“They just have a much greater risk of collapse or damage in an earthquake,” Auflick said. “So because of our earthquake risk here in Seattle, that’s a really big thing, and the International District is one of those neighborhoods with a higher concentration of older brick buildings, URMs, simply because it is one of the historic districts.” Building owners should upgrade their buildings to make them stronger, Auflick said, and building residents should be aware of the possible risks of living in such a building.

Ethan Malone of the Seattle Department of Transportation presented an exhibit on Seattle’s new streetcar, which opened Jan. 23. One of its routes connects Pioneer Square and the International District to Capitol Hill.

Malone speculated that putting ID on the road might inspire more people to explore it and decide to move or start a business there.

Arisa Nakamura, who studies landscape architecture at the University of Washington, had an exhibit with information about her master’s thesis, which focuses on perceptions of community and safety in ID.

“I chose this site because it has hosted communities for over 150 years and I wondered what had fostered people’s sense of belonging in such a culturally diverse area,” Nakamura said. “I’m trying to find out in terms of a sense of belonging, where was an important place or which community and in terms of public safety where do people feel and why?”

Nakamura invited people to complete surveys to help him determine what people think of different places in the neighborhood. Based on these surveys and previous interviews she has conducted, Nakamura dotted a map with red representing places perceived to be unsafe, green for community places, and blue representing community spaces that do not no longer exist.

The area below I-5 was often considered dangerous, and Uwajimaya was often cited as a place of community, Nakamura said. An example of a community venue that no longer exists is the Nippon Kan Theatre. Nakamura hopes to conduct two interviews with each ethnic community in the neighborhood for his project.

Jessa Timmer, who recently became executive director of CIDBIA, the Chinatown International District Business Improvement Area (CIDBIA), said it was important for the district “to bring everyone together in the same room under the same roof to talk about the same things – economic development, the projects that are happening in your community, how it will affect the whole community.”

The death of neighborhood councils, told by Wallingford