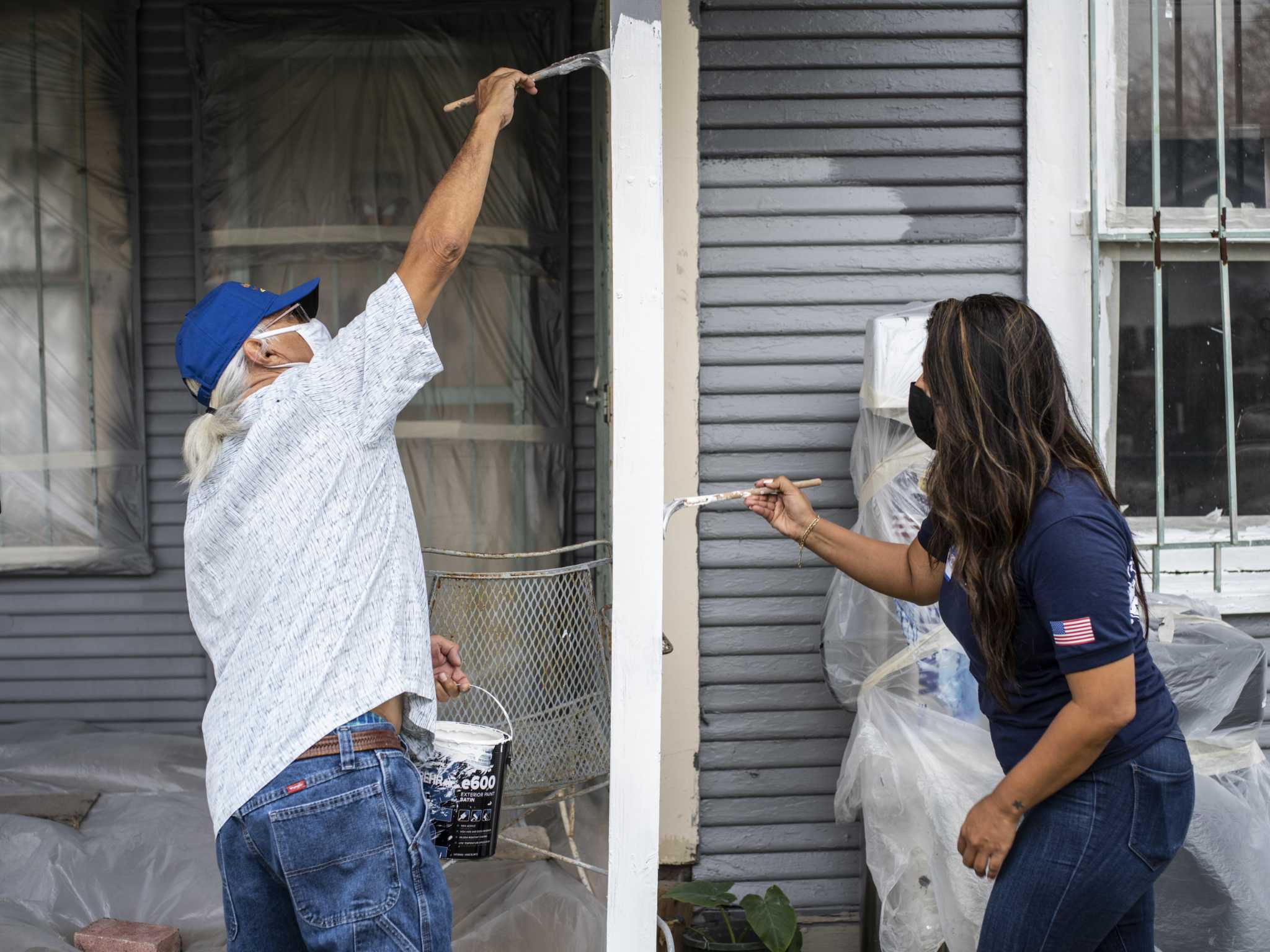 Community volunteers are taking back the east side of San Antonio, one block at a time

For many years, the Germans have been active in their East Side neighborhood as captains of citizen blocks, watching for trouble and helping those in need.

Now the older couple were getting a helping hand themselves on Saturday, as the Neighborhoods First Alliance continues its campaign to take back the East Side one block at a time.

Gilberto Aleman, 82, hugged his wife, Alicia, 68, as they watched dozens of volunteers invade their one-story home on Hays Street, covering the weathered old teal paint with a soothing dove-grey hue.

The happy couple were impressed that so many of the people who came to help were young people.

“It’s a learning stone for them, so they can know it and bring it to others,” Alicia Aleman said in Spanish, translated by the alliance’s Jessica Flores. “It’s sincere from the community.”

From 8 a.m. to noon, more than 50 participants took part in the house painting project sponsored by Neighborhoods First Alliance and the WestCare Foundation.

Organizers said the Germans’ home is in a high-crime area brimming with drug-related activity and drive-by shootings. There have been several homicides.

TC Calvert, president of the alliance and community activist, said the event is not just about home renovations.

“It’s about sending a message to the drug houses in this area that they don’t run anything,” said Calvert, 68. “There are more good people in this neighborhood than bad people.”

Calvert was sitting under an awning outside the home of Mary Cade, 75, who lives across from Alemanni. She too was once a block captain. The longtime community activist said it was a shame that in the twilight of his life, Cade had to live on the street with drug dealers.

“They’re doing everything they can to keep the community safe,” Cade said of the alliance. “It means a lot to me.”

Calvert noted that the area is just five blocks from Hayes Food Mart, which at one point drew 1,000 police calls for reports of all manner of crimes. Calvert said the alliance, businesses and nonprofits worked with the city to close the store.

He said residents knew First Alliance members by their blue shirts and drug dealers called them “the cleaners.”

Calvert said a drive-by shooting of an 11-year-old boy at his home years ago sparked his mission.

“It hurt my heart,” he said. “A young boy getting shot. This is unheard of.

Greg Muhammad, 58, of the Nation of Islam, said he walked out in peace with the Calvert Rapid Response Team as they handed out “hot spot” maps to residents. Residents can anonymously report a crime on the map which the team then brings to the San Antonio Police Department’s East Side Substation.

Precinct 4 Commissioner Tommy Calvert joined his father’s volunteers and campaign on Saturday. He said one of the things that weighs on him as an elected official is people who live in an unsafe neighborhood.

“To be terrorized by the fear of a random shooting is one of the worst feelings,” said young Calvert. “I hope our presence here will let the community know that we are going door to door to figure out how to stop the elements of crime. It is a multi-pronged process. An organized neighborhood does not have to suffer because it is organized.

Community advocate Mario Salas, who once lived a block away, was among the city leaders present at the event. He said he had seen the area go from pristine to abandoned homes and it was heartening to see the positive activity in his old neighborhood.

Several San Antonio police officers mingled with attendees at the site on Saturday.

“It’s important,” said the San Antonio police sergeant. Dean Reuter of the East Side Substation. “Neighbors are getting involved and helping with all of this.”

“I love helping out my neighborhood,” she said during a break from painting. “If I can put a smile on someone’s face, I love it. Especially during the holidays and the coronavirus.

Clark, 33, said everyone pulling together is the definition of community.

“If we put things like this in place,” he said, “we can really start to see the long overdue rebirth of our community.”

One Tinley Park, Sam’s Club and community volunteers team up to deliver 40 turkeys to veterans