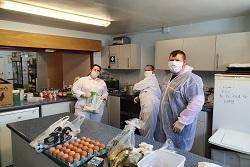 Council gives special vote of thanks to community volunteers

The elected members sent a special vote of thanks to all the volunteers and community resilience groups who have played such an important role in the Covid-19 emergency over the past two years.

At the height of the pandemic, there were hundreds of local volunteers and at least 69 resilience groups supporting the region’s response and recovery efforts.

Resilience groups have become an integral part of multi-agency community support centers set up by the Council, NHS Borders and the third sector to provide support to vulnerable people, particularly those who were shielding or self-isolating.

Not only did the volunteers undertake vital tasks such as delivering food and medicine, but they also coordinated the large number of offers received from residents and organizations willing to help.

Other examples of the community spirit shown in the area included the establishment of food banks, the provision of grocery collection and delivery services, the provision of hot, home-cooked meals and even a dog-walking service. .

“From the start of the pandemic, we saw people coming together to join their local resilience group or start new groups as needed.

“These volunteers have worked tirelessly at a very difficult time to support vulnerable people by providing services such as shopping, collecting prescriptions or a friendly voice on the phone.

“While we can’t quantify the number of hours or the amount of support they provided, we do know it was tremendous, something even we in the Borders have never seen before. The most humiliating thing about all of this was that they weren’t asked to do it – they just did it.

“It would be impossible to single out any particular individual or group for particular praise, because every action, no matter how small, that each volunteer has done in their community has made a difference for someone and deserves our heartfelt thanks.”