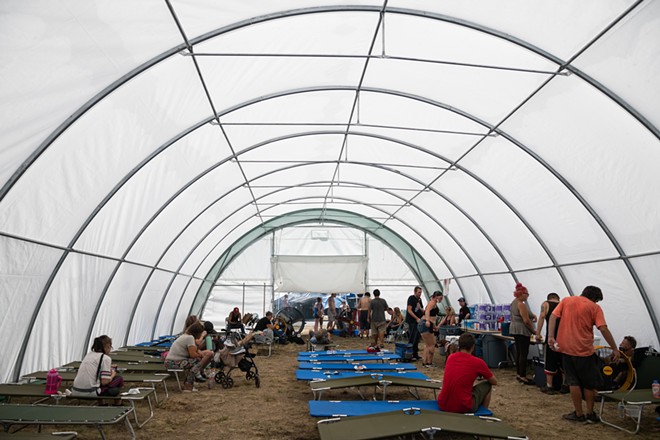 During a week of brutal heat, community volunteers came together to fill in the gaps in the city’s emergency plan | Local News | Spokane | Interior of the Pacific Northwest

This chill tent at Camp Hope was a “godsend” to many.

Llast year’s heat wave saw record high temperatures of 109 degrees and at least 20 confirmed deaths in Spokane. To prevent a repeat of the suffering, the city passed a new emergency ordinance that requires cooling shelters to be opened whenever temperatures are expected to be 95 degrees or higher for two or more consecutive days.

In many ways, last week’s heat wave was the first test of the plan.

On Monday, July 25, the city extended the hours of four libraries so people could use them to protect themselves from the heat. The Spokane Transit Authority said people could ride for free if they told the driver they were on their way to one of the library’s cooling stations. The city also asked people to use the 19 wading pools and six swimming pools located throughout the city.

“We are fortunate to have fantastic public facilities that can expand to quickly meet the needs of our residents when the weather turns extreme,” Mayor Nadine Woodward said in a news release.

But as temperatures began to climb, many community groups feared the city’s response was not enough. A number of nonprofit and community groups, including the Music, Art, Creativity (MAC) movement, Spokane Community Against Racism, Latinos in Spokane, the Spectrum Center and others, began working together as Cool Spokane to take charge. and keep people cool. The group put out calls for volunteers and donations on social media and began planning pop-up cooling stations across the city.

One of the biggest problems with libraries is that many homeless people just didn’t know they were an option, says Hadley Morrow, who volunteered with Cool Spokane during the heat wave.

“It was shocking how many people we met on the street who had no idea libraries were available,” Morrow said, adding that those same people often told him they wouldn’t have wanted go there anyway.

Many people have pets, a large number of possessions, or a deep-seated distrust that keeps them from using libraries, Morrow says.

Veronnica Hawkins volunteered to help Cool Spokane after seeing a call for help on social media. She worked for six straight days in brutal heat and says the tight-knit community made the experience incredibly rewarding.

Each morning, Hawkins and the other volunteers would report to a location on Martin Luther King Jr. Way and Division Street to begin installing the canopy and coolers. Throughout the day, various nonprofits and community groups were dropping off supplies. The group handed out water bottles, food and spray bottles so people could get steamed up. Hawkins became known to people as the “famous maker of peanut butter and jelly sandwiches”.

“It was really just a place where they could come to hydrate, eat food, really shade and get out of the heat,” Hawkins said.

Hawkins estimates the tent served between 300 and 500 people during the week. The majority were homeless or otherwise vulnerable to the heat. Many homeless people ended up volunteering to help run the cooling station, Hawkins says.

Hawkins says his tent saw no serious medical emergencies, but they did see many people who were dehydrated or hadn’t eaten in days. She doesn’t know what they would have done without Cool Spokane.

At Camp Hope, a homeless encampment in the East Central district, which has more than 600 inhabitants, volunteers have also taken matters into their own hands. On Tuesday, organizers from Jewels Helping Hands, a nonprofit not directly affiliated with Cool Spokane, began building a large cooling shelter complete with fans, swamp coolers and space for 150 people. Camp Hope is 1 mile from the nearest library. Julie Garcia, executive director of Jewels Helping Hands, says even with a free bus ticket, most residents are unwilling to make the trip because they fear theft if they leave their tents unattended.

The city’s plan for homeless people to go to libraries doesn’t make sense, Garcia says, adding that setting up a cooling shelter at Camp Hope was the only logical solution.

“When you have so many homeless citizens, there has to be a better plan,” Garcia said.

The cooling shelter became a contentious issue on Thursday last week, when the city ordered the Washington State Department of Transportation to dismantle the shelter because it was unapproved and posed a liability risk. WSDOT owns the land occupied by both Camp Hope and the refuge. The state agency didn’t approve either, and both are technically illegal.

In a joint statement released Friday, the WSDOT and the Washington State Department of Commerce said they would not comply with the city’s order because they were more concerned about the safety of people and would continue to let non-profit organizations help those in need.

Camp Hope resident Karen Potter recounts Interior that cooling shelter was an essential resource. She has two dogs and cannot go to the library.

“I knew that if I couldn’t get into a place that had air conditioning — or at least fans and water — my whole system would be screwed up,” Potter said.

The city had said the WSDOT could face a $536 daily fine if the tent was still up at 9 a.m. Monday. But by late Monday morning the tent was still up and running and around 10 people were using it to cool off. In an email, Brian Coddington, the city’s director of communications and marketing, told the Interior that no fines had been issued and that the city was continuing its efforts to discuss a solution to the situation.

Potter says the cooling tent has been a “godsend” and she’s glad it’s still up.

“I’m so glad the DOT went and said to the city, ‘We’re not taking it down,'” Potter said, raising a middle finger to illustrate the tone of the WSDOT’s response.

On Monday, the city council decided to allocate $120,000 to “provide shelter during extreme weather events, including but not limited to additional staffing hours at libraries during extended hours at the center of cooling and the operation of stand-alone cooling centres”. The board also planned to hold a special meeting Thursday to discuss the possibility of WSDOT leasing the land occupied by the Camp Hope cooling shelter to the Empire Health Foundation or the city itself.

VSCity Council member Zack Zappone says he doesn’t think the plan for the city’s cooling center was adequate and that it’s unrealistic to ask Camp Hope’s more than 600 residents to seek out the libraries.

The ordinance passed by the city last summer requires cooling centers to be open whenever temperatures exceed 95, but it does not specify what a “cooling center should look like.” Zappone thinks extending the opening hours of libraries and calling them “cooling centers” is not in line with the intent of the law.

“I think there’s general frustration – what’s the point of continuing to change ordinances if they are to be ignored?” said Zappone.

On Monday night, Alexis Gallaway Conasket was working in a tent outside City Hall handing out bottled water. They spent about 20 hours working at cooling stations during the heat wave; on Saturday, the heat was so intense that they fainted.

“It really worries me for the people who are stuck here,” Conasket says.

Conasket says they want the city to find more places to open cooling shelters and make more of an effort to work with the many community groups that stepped up during the heat wave.

Morrow agrees. No one expects the city to do all this work on its own, she said.

“I think what we’ve proven over Cool Spokane Week is that there are a lot of people out there willing to help out,” Morrow said. ♦