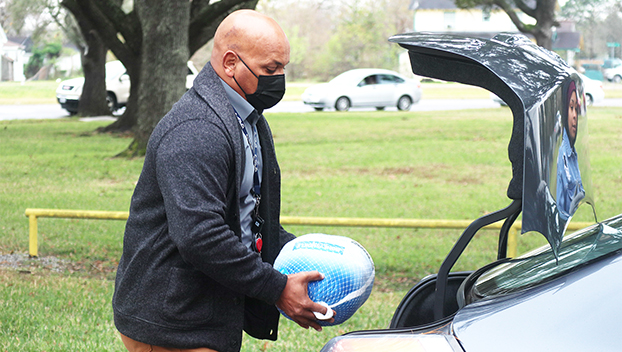 Hundreds of cars lined around Gilham Circle as community leaders spread Christmas cheer to the tune of 500 turkeys.

Darrell Foreman stood in line for nearly an hour for a turkey Monday morning in Port Arthur.

“It’s a blessing,” he said of the gift. “To have the Southeast Texas Food Bank do this kind of work and come here is a blessing. It helps. Lots of people deal with stuff, but we take it one day at a time.

Cars line up for a turkey donation at Gilham Circle on Monday. (Chris Moore/The News)

“There is nothing better and richer than watching and being able to help and nurture people,” she said.

“Southeast Texas ranks 4th in the nation for food insecurity. It’s really important to all of us that we see this happen. Since Thanksgiving, we’ve done 5,500 turkey giveaways. It’s because we believe in the mission to eradicate hunger and nurture hope… On someone’s worst day, if they can come out and see this, it’s a blessing. That’s what it’s about.

On Monday, between 20 and 30 people were directing traffic and putting boxes of food in passing vehicles.

Temperatures hovered around the mid-40s in the morning, but that didn’t deter volunteers from working the lines. Reasons said she was grateful to people who gave of their valuable time. 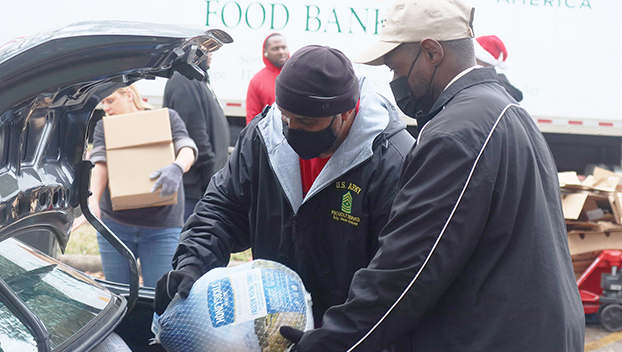 Charles Davis, left, and Jimmy Taylor load a turkey into the back of a car. (Chris Moore/The News)

“They know it’s for a good cause and they never say no to me. The food bank knows that when they call me, we’ll be there until he’s gone. We only leave at the last car, and it goes fast.

The giveaway started at 10 a.m. with vehicles already lined up around the circle and on the side streets. Reasons said the event continued until they ran out of turkeys, which took a few hours.

Newhouse said she knows she can always count on Reasons to deal with volunteers.

“We are all volunteers (of) Ms Olga in Port Arthur,” Newhouse said. “She has a team that doesn’t break.”

During a week of brutal heat, community volunteers came together to fill in the gaps…