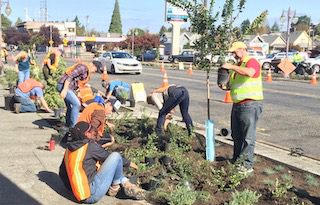 There’s a milestone in Tacoma to celebrate in September and everyone in the city is invited to participate. In fact, it’s about everyone who lives here because this month marks the 30e anniversary of the official establishment of the Tacoma Neighborhood Council program by city ordinance on September 22, 1992. Councils are all about citizen engagement and that is exactly what the celebration organizers have in mind.

First, there’s a citywide scavenger hunt going on with the grand prize of a single big pearl for 30ebirthdays are traditionally commemorated with this special gemstone. To participate, go to 253ccot.org where you will find eight clues corresponding to each neighborhood of the neighborhood council.

Solve each clue, take a photo of each location or find photos online and email them to [email protected] by Friday September 23. All timely and correct entries will automatically be entered into the Pearl Grand Prize draw.

The Pearl Drawing will take place at the Pearl’s Birthday Party on Saturday, September 24 from 11 a.m. to 2 p.m. at Fabulous Fifties Hall, 455 St. Helens Ave., and you don’t need to be present to win. This is a family and all-ages celebration featuring fun activities, light refreshments, raffles and an awards ceremony honoring former ward council members and others. who helped launch the program. No need to RSVP or buy a ticket. This evening is free so come as you are.

The anniversary encompasses Tacoma’s eight ward councils and the Tacoma Community Council, a separate body made up of representatives from each of the eight councils that meets monthly collaborate and exchange information. Like neighborhood councils, community council meetings are open to the public and are held on the first Thursday of each month.


Each neighborhood council has its own meeting times and locations. Some take place in person, online, or a hybrid of the two. To learn more about the council in your neighborhood, go to Google or Facebook and search for one of them: Central Tacoma, Eastside, New Tacoma, North End, Northeast, South End, South Tacoma, and West End. Also visit cityoftacoma.org and type “neighborhood councils” in the search field.

“There’s been a steady stream of growing interest in our neighborhood councils and renewed energy, which is really good,” Brewer said. “We are all here as volunteers who care about our communities to defend our neighborhoods. It is great to be able to connect people with the right people and the right services in the city to help them with whatever they need. need to solve the problem.”

At least some of this renewed interest is due to the pandemic and councils moving online to hold meetings. This allowed more people to participate, especially parents with little ones, the elderly and people with reduced mobility.

“Most of our ward councils have been quite successful in pivoting to a virtual environment and have actually seen an increase in attendance, which I think is exciting,” said Allyson Griffith, acting director of community services. neighborhood and communities in the city of Tacoma.

Griffith has been involved with Tacoma neighborhood councils throughout her 15-year career with the city.

“The reason I do public service is for community engagement, so working with ward councils is a central part of that. It’s one of the key ways the city interacts with our wider community. “, said Griffith.


Councils provide an opportunity for residents to come together and share information about what is happening in their neighborhood, solve problems and work together. The councils also play an advisory role to the city council in terms of specific neighborhood interests such as town planning and public safety issues, for example.

Brewer said SENCo frequently hears from residents about the state Tacoma is in right now, with high crime rates, homelessness and just that feeling of uncertainty.

“It’s just a little scary…and we’re not advocating staying indoors and hiding from the world. We’re saying go out and do something nice for your neighbor. Just the sense of community that that really brings to the neighborhood level is something special.”

The roots of our city’s neighborhood councils go back to the 1970s and to Elton Gatewood, a Tacoma resident since 1964 and city employee for approximately 37 years until his retirement in 2012.

“That was my ambition – to create an environment for government to respect people and for people to respect government,” Gatewood told the Tacoma Weekly. “It was a personal mission to make sure the government was fair and inclusive for everyone and that relationships were built.”

Gatewood started in the city’s planning department assigned to the Program Management System where he learned how government works from scratch. He explained that around 1975, the Department of Housing and Urban Development (HUD) moved from urban renewal to community development and required cities receiving HUD funds to have a system participation plan. Gatewood volunteered to develop the plan given that, from what he could determine, there wasn’t much interest among his peers in urban planning to step out of the office and into engage with citizens.

“The city at that time, and probably now in some cases, didn’t want to be bothered with ‘those people,’ and I wanted to know who those people were,” he said. “Planners are great guys as visionaries, but they lacked the human touch, in my opinion.

Born and raised in Memphis, Tennessee, in the 1950s and 1960s, Gatewood came from a working-class background who, like him, faced racial injustices and he needed to be strong in the face of the hardships of that time. As a black man working at Tacoma City Hall in the 1970s, he found himself to be something of an anomaly among those who had not been exposed to life outside of their own personal surroundings. , so diplomacy was Gatewood’s co-pilot in his work to connect citizens with government as well as with his colleagues. He felt an affinity with the very types of people he interacted with in the Tacoma neighborhoods, and it showed. Residents learned to respect and trust him because he treated them the same.

Starting from the city’s nine identified planning areas, Gatewood proposed 83 small sub-wards. “I grouped them by line delineations and census data to create what I called ward council areas which coincided with the nine planning areas that had already been developed. There was one without people – the downtown and harbor industrial area – so I combined that as one and found eight ward council areas.

As each council formed, Gatewood remained involved with each of them.

“I had a hell of a schedule. Every meeting, once a month, I was going to every one of them. Sometimes some of them had their meeting the same night, so I would run from south Tacoma to west end and I would stay for an hour to maintain that connection. Sometimes I didn’t have much to offer, but the mere presence of being there to let people know that I was always by their side meant so much for them.

Gatewood is humbled and grateful that neighborhood councils are still working well all these years later.

“It was such a joy in my life,” he said. “I applaud the citizens of Tacoma who I worked for and who supported me because I couldn’t have done it on my own.”