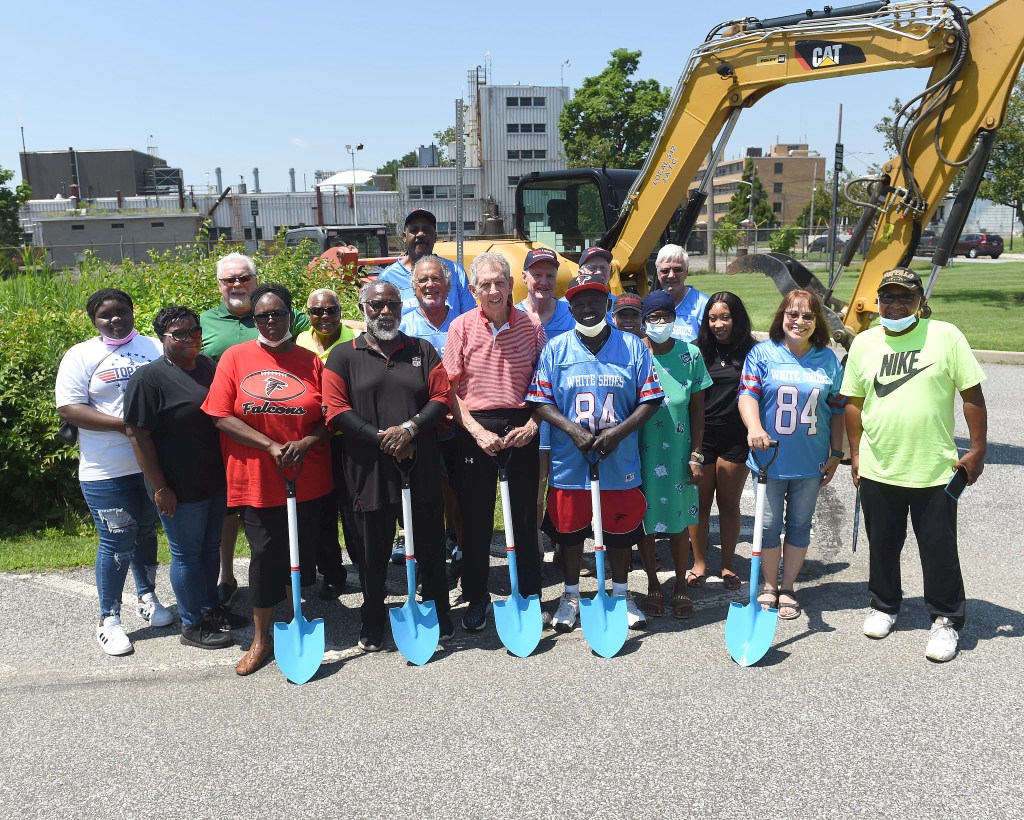 The ground was broken on July 12 for the statue outside the Marcus Hook Community Center which depicts Johnson, Greater Chichester High, Widener and the NFL doing his famous “Funky Chicken Dance” with the help of several local unions.

Members of Operations Engineers Local 542 began the excavation while Laborers Local 413 and International Brotherhood of Electrical Workers Local 654 joined the project. All offer their services on a voluntary basis.

Johnson, from Marcus Hook, has been named Football Player of the Millennium by the Daily Times. He was named to the NFL’s 75th and 100th Anniversary Teams as a comeback specialist and was inducted into the College Football Hall of Fame. Johnson was recently a Pro Football Hall of Fame semi-finalist.

The public unveiling of the statue is scheduled for Saturday, October 15 at noon.

Malloy, a 1989 graduate, is the all-time leading scorer for men’s basketball with 1,222 career points. He is only one of two boys to reach the 1,000 point plateau. He then played at Saint Joseph’s and the University of Philadelphia (now Thomas Jefferson University).

Dessart-Mager, a 2002 graduate, was a two-time Daily Times Women’s Basketball Player of the Year (2001 and 2002) and McDonald’s All-American while at O’Hara. She also earned All-Catholic honors three times and was the Catholic League MVP before pursuing a college career at Villanova, where she was named Academic All-American.

Buonato captained O’Hara’s football and baseball teams for three years. He earned All-Delco honors in football as a senior in 1981 and helped the Lions win the Philadelphia City Championship in 1979, the Catholic League crown in 1980 and finish second for the PCL title. in 1981. He also served as student council president for two years and was a member of the National Honor Society. He continued his football career at Penn where he captained the team in 1986 and was selected to the All-Ivy League first team as a center.

Dumont was captain of the track and field team and won All-Catholic honors as a senior in 1986. O’Hara’s schooling. He is known throughout the county for his business acumen and philanthropy.

Sister Rose Martin is Executive Director of Hope Partnership for Education, an independent middle school and adult education center serving children, families, and adults in North East Philadelphia, one of the poorest areas from the city.

Six players with Delaware County ties, including four from the Episcopal Academy, have been selected to attend the 2023 USA Field Hockey Women’s U-21 and Development Team Selection Camp, which will take place in December. or January on a site to be determined.

Once selected, the U-21 team will prepare for the Junior Pan American Championships in April in Barbados with the hope of qualifying for the FIH Junior Women’s World Cup of Hockey in December in Chile.

Two former Daily Times Players of the Year were among six local players invited to the camp. Ashley Sessa (POY 2021) and Kelly Smith (POY 2019) of The Episcopal Academy top the guest list. Sessa, a two-time All-Delco, will be a freshman in North Carolina. Smith will be a sophomore for the Tar Heels.

EA’s two-time All-Delco Macy Szukics also earned an invite. She’ll be a freshman at Duke. All-Delco Charlotte “Charly” Bruder will be a senior at Episcopal this year. The other guests are Meghan Mitchell, Notre Dame graduate, sophomore at Villanova, and Lindsay Dickinson, Glen Mills resident, graduate student from Virginia. She graduated from the Villa Maria Academy.

It’s been quite the summer for Bonner-Prendergast’s Kevin McGonigle. The Daily Times 2022 Baseball Player of the Year appeared in the MLB High School All-American Game at Dodger Stadium on July 15 and got a hit in the game.

Later this month, the rising senior and Auburn commitment will be the only player from Pennsylvania to participate in the Perfect Game All-American Classic at Chase Field in Phoenix on Aug. 28.

From there, McGonigle departs for Fort Myers, Fla., to attend USA Baseball’s Under-18 training camp from August 29 to September 2. The top 20 players from this camp will be named to the U.S. team that will compete in the World Baseball Softball Confederation (WBSC) Baseball World Cup Sept. 9-18 in Bradenton and Sarasota, Florida.

To submit an article for In the Community, email [email protected] Please provide as much information as possible, a photo and a contact person.

In the community: Volunteers participate in the “White Shoes” statue project | NFL